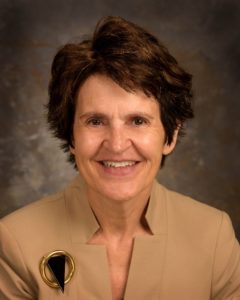 Dr. Laurie Stenberg Nichols became the 26th President of the University of Wyoming in May 16, 2016. She is the first woman to hold this position. Dr. Nichols was appointed to the Goldwater Board of Trustees by President George W. Bush and approved by the Senate in 2004.

Nichols has had a long distinguished career in education. She has taught at the secondary and post-secondary levels in South Dakota, Colorado, Nebraska, Ohio, Idaho and Iowa. She has received numerous teaching and research awards for her innovative teaching including her involvement in the creation of a 10-state, collaborative, on-line program called the Great Plains IDEA. From 1994-2009 she served as Dean of the College of Family and Consumer Sciences at South Dakota State University. Laurie was an American Council on Education (ACE) Fellow, class of 2006-2007, where she spent fall semester on the campus of California State University at Fresno under the mentorship of President John Welty. From August 1, 2008 through mid-June, 2009, Nichols served as Interim President at Northern State University in Aberdeen, South Dakota. On June 22, 2009 she returned to her home campus at South Dakota State University as Provost and Vice President for Academic Affairs.

Throughout her career, Nichols has provided leadership in areas including diversity, academic advising, and strategic planning. Of particular interest to Nichols is providing higher education opportunities to the native peoples of North America. She has secured numerous grants to enhance collaboration with South Dakotas tribal colleges in areas of curriculum development and articulation.

In addition to her service on the Board of Trustees for the Barry Goldwater Scholarship, she is past-chair of South Dakota Voices for Children, a political advocacy group, and was a founding member of the Board that created the Brookings Boys and Girls Club. She also served on the Brookings Chamber of Commerce Board and the Planning and Zoning Commission for Brookings County.
Nichols is passionate about working with young people in solidifying educational and career goals and developing leadership skills.