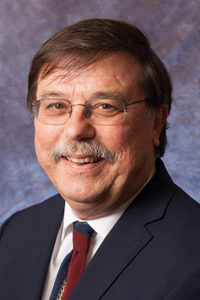 John is an experimental nuclear physicist with research interests in the area of light heavy-ion reactions. After earning B.S and Ph.D. degrees at the University of Notre Dame in 1972 and 1976, he was a post-doctoral research associate at Florida State University. In 1978, he became a member of the physics faculty at Tennessee Technological University where he developed one of the first federally-funded research programs in the nation to involve physics undergraduates in research. In 1988, he joined the Argonne National Laboratory staff where he oversaw the laboratory’s college outreach programs.

In 1994 he joined the staff at Department of Energy headquarters to help establish the Department’s new EPSCoR program. John was appointed Dean of the College of Science at Murray State University in 1998. During his tenure as Dean, the College successfully competed for a Howard Hughes Medical Institute award, NSF Collaborative Research at Undergraduate Institutions award, NSF Course, Curriculum and Laboratory Improvement grants, and NSF Experimental Program to Stimulate Competitive Research award. He was the founding Director of MSU’s Undergraduate Research and Scholarly Activity Office and served as the Director of MSU’s McNair Scholars Program.

From 2008 – 2010, John served as a Program Officer in the Division of Undergraduate Education at the National Science Foundation. In 2016, John was named the third President of the Goldwater Scholarship and Excellence in Education Foundation. He has been the President of the Council on Undergraduate Research and the Chair of the American Physical Society’s Committee on Education. He is a Fellow of the Council on Undergraduate Research and of the American Physical Society.