Class of 2016: Ariel Helms’ past inspires her path for the future

For Ariel Helms, a genealogy search when she was young revealed a long-kept secret: Her ancestors were Cherokee Native Americans.

“My great-grandparents had taken this knowledge to the grave,” she said. “My dad grew up thinking he was of German heritage. It was, at the time, a difficult thing to be Native American, so it was kept very secret.”

Helms also discovered that she is related to a leader of the Cherokee Nation at the time of the American Revolution.

“Nanyehi is my great-grandmother seven generations back,” the native of Bixby, Oklahoma, said. “She negotiated for peace between the settlers and the Cherokee. She saved countless lives, both Cherokee and the white settlers.”

Having a Native American background began to make sense—it could be why so many family members suffered from diabetes.

“One in six Native Americans is diagnosed with diabetes,” she explained. “The incidence of diabetes in the Native American population is 150 percent higher than the national average.”

These bits of information motivated Helms to seek out scientific research and Vanderbilt. The molecular and cellular biology major began her research career by interning with the Vanderbilt Undergraduate Minority Summer Research Program. She has worked in the Vanderbilt Diabetes Center’s lab the past two years.

In the lab, she is helping to search for a link between cystic fibrosis and diabetes.

“Our project is looking at the potential of a particular protein channel, which is certainly implicated in cystic fibrosis, to see if it has a role in the pathways that are dysfunctional in diabetes,” she said.

To get more students into research, Helms co-founded the Scientific Immersion and Mentorship program at Vanderbilt. It matches students to lab-training programs.

“We put together a research fair, sort of like a career fair but for research positions. We have been able to match over 50 students and allow them to have these same immersive experiences in research,” she said. “What’s been truly incredible is we started out to help just five and our program has grown to have over 600 members.” 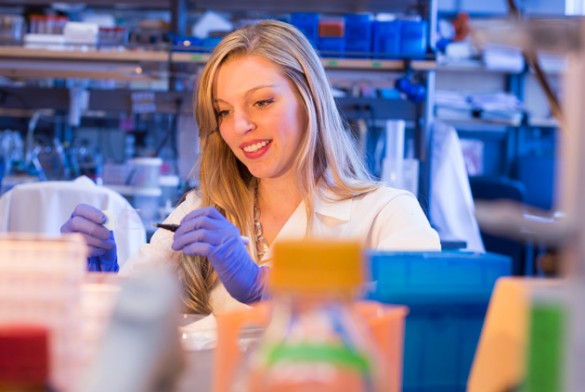 Ariel Helms is a Harold Stirling Vanderbilt Honor Scholar. She was photographed in the Vanderbilt Diabetes Center lab. (Susan Urmy/Vanderbilt)

Helms was named a 2015 Truman Scholar—one of only 58 nationally—and a Goldwater Scholar, a premier undergraduate award. Following graduation she will pursue medical school, working toward an M.D./Ph.D. degree in molecular physiology. Her goal is to be a physician scientist.

“My ultimate dream is to contribute to the alleviation of the burden of disease in a way that benefits my Native American community and the nation as a whole,” she said. “I want to help people struggling with diabetes.”